MBAKA: I never seek contract from the president 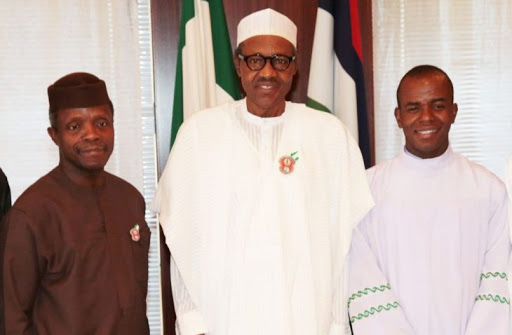 Insists he approached Bughari to boost security in Nigeria

Reacting to presidential spokesman, Garba Shehu’s claim that he fell apart with the Presidency on account of being denied contract, the Spiritual Director of Adoration Ministry, Enugu, Nigeria (AMEN), Rev. Fr. Ejike Mbaka, has clarified that his recommendation of three contractors to President Muhammadu Buhari to stem the tide of insecurity in Nigeria during his first term was not drivenby pecuniary motive.

The media aide had alleged that the Catholic cleric took three men to his boss for an unsuccessful project.

But responding during a ministration, Mbaka explained: “I took three contractors to the President and the reason was to tackle insecurity during Buhari’s first term.”

He continued: “In Nigeria, if you say the truth, they attack you. I’m not discouraged and I have been waiting for them to challenge everything I said. Challenge the truth, whether there is insecurity or not.null

Dear Reader Thank you for your patronage Please Enter Your Comments Here We Love To Hear From You. Thank You